Stage was decorated!! The conference hall was full of people.

Just got some time left for announcement....

Anjana was lost in her childhood days while seeing the glitter of the stage....

When I(Anjana) was younger, there was a lack of confidence in me.

"Ufff.... Anjana when will you understand , why always get only a passing Mark's.... I don't understand what you are doing with studies....See your sister...She is so talented in studies and also in beauty...Pata nhi kahan se paida ho gyi hai" Mother was getting angry on Anjana while seeing her marksheet on the 12th board.

"But Mumma, I tried a lot to do hard study also but I don't know why I am lacking in getting good marks" Anjana disappointed spoken..

"why it happens to me always, I m totally imperfect, nobody never praise me for any work, neither my hard work nor my beauty" Anjana was totally disheartened whenever she always listen her mother while comparing with other girls said this to her with in every next two to three days...

Her mother not only compared with other girls but also with her younger sister Shipra too. Anjana tries to do her best every time, but her mother never says any praiseful words which could motivate her. She totally lost her confidence

An upper middle class family girl named Anjana lives like in a simple manner, down to earth, polite, having a dark wheatish complexion girl but really smart, sharp features and attractive looks but just because of shipra is so fair and white as milk, her mother always gives priority to shipra and always compare the beauty or in any other kind of works between two sisters.

Though Anjana was a happy-go girl, but every time she feels upset when her comparison takes place with anybody. She always believes that everyone has a unique identity. Then why am I always the person who comes under this comparison circle?

Shipra was Anjana's younger sister. She was intelligent, beautiful and looking like a fairy doll. She also thinks like her mother and never gives respect to Anjana's feelings. Shipra was studying mechanical engineering and used to get good scores in her class. Anjana was an average speed girl. She is not interested in doing lots of study.

She doesn't believe in being a bookworm but yes she also wanted to join a job in aviation industry (airlines) as she loves to travel by plane. This was her only dream (bus itna sa khawab hai..) but how.... She could get her dream fulfilled with only passing marks in studies ,  how she could get the job in airlines.

Anjana always finds ways to enter the aviation industry but every time her luck straps her. When her sister Shipra was studying engineering then anjana used to say "maa now we can go anywhere from plane if shipra becomes a pilot".

But her mother wanted to Shipra could become a doctor or an architecture as she afraid of flying. Shipra also doesn't want to become a pilot, so Anjana dream of flying high in plane was becoming an incomplete desire.

Such as tit, anjana completed her graduation.

After Anjana's Graduation, though Anjana was working in some company as an Analyst as anjana has a strong observation research skill so she did a job of Analysis and she gives so much effort on her work but she is totally not interested to do that job in small company else she doesn't have any other options just because there was a lot of restrictions on timings, distances etc. from the side of her house. Because of these restrictions Anjana couldn't make her decisions on her own. Her mother never allowed Anjana to go very far for a good job.

Anjana and Shipra got married. Shipra was not allowed by her husband to do a job, but Anjana's husband has no problem with her job. No more restrictions on timing and distances. So Anjana got promotions also after giving her efforts to the office work. Now Anjana wanted to change her job but didn't get good options. She was trying.

One day she got a call from a company which has a good post and distance not too far from her house. Anjana didn't know about that company when she went for an interview, suddenly she noticed everywhere there was aeroplane wall papers on the wall and some masterpieces and models of aeroplanes were kept at the reception desk. Anjana was so surprised to see it, it was none other than the Aviation Company.

Anjana had been selected by finance department of that Aviation Company as a Manager - Revenue Analysis. Now the new journey was waiting for Anjana's Life and that was so mesmerising when she got on different destination trips all over the world and, of course from the plane due to covering all the audit from each destination covered by that aviation company, so she got audit tours every two to three months gap.

By the thunder of applause, Anjana came back from her past. She has been awarded as the best employee of the year due to fraud in the company was caught by Anjana's strong analytical skills and her hard efforts which was worthwhile.

Anjana fulfilled her dream and the journey was double beautiful when her mother said "please forgive me my daughter, I always compare your skills from shipra, I was wrong, I forgot that every child is special and today you won the whole world, my talented daughter".

Anjana gave heartiest thanks to her beloved husband who always supports her in every step.

So friends, every child is different from others, we don't have right to compare the qualities from any other child to lose their confidence..Every child is special... So, if you have a dream then DREAM IT, BELIEVE IT & ACHIEVE IT like Anjana.... 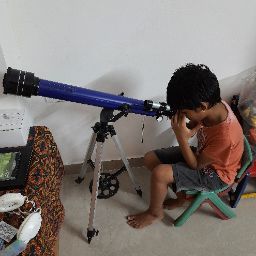