The Kamakhya within me

It was 11th October 2020, and I was already four days overdue for my monthly cycle. With each passing day, I started getting anxious and unsettled for somehow, I wanted my 'periods' to get over before the divine period of 'Navratri'. It was 11th October 2020, and I was already four days overdue for my monthly cycle. With each passing day, I started getting anxious and unsettled for somehow, I wanted my 'periods' to get over before the divine period of 'Navratri'.

I did everything in my power, ranging from excessive gyming, rigorous cycle riding, sit-ups, every- everything, but alas! nothing worked.

"Why are you so adamant but ?" " Since when have you started relating the bodily phenomenon to religious events ?", asked Vikrant, my dear husband. His straight but sorted statement once again pinched me hard and brought me to terms that why am I unnecessarily worried about something that is first and foremost, not even in my control, and secondly, a practice that I myself don't believe in.

For me, I absolutely do not believe and agree with the concept of self-isolation or 'sitting-aside' , while being in 'chums', owing to unavailability of any meaningful rationale behind the practice. However, I also do not intend in purposefully doing something, that goes contrary to the general belief and religious sentiments of the people.

Anyways, with each passing day, I was losing my hope and finally, I explained to myself to go with whatever comes ahead. In short, I left it all at "Maa Durga".

Eventually, oscillating between hope and despair, came the 17th October, 2020 and the magical 'period' of Navratri-pooja began.

In my mind, until now, I was quiet sure to enjoy my 'gloomy' days amid the celebration and the only truth was that I couldn't do anything about it.

It was 1st day of the pooja and I got ready quiet early in the morning, to make the preparations for pooja. It was only when I performed the holy rounds of 'aarti' that I received my 'prasad' and there it was, I had got my 'chums'.

Disheartened and completely bewildered, I excused myself from that 'sacred' part of our apartment. My mind said that I should clearly practice what I believe in, while my heart impounded for not purposefully hurting religious sentiments of other family members.

But, as they say that the universe is such a magical place that if we stop and vigilantly look around, we can find answers to all our dilemmas, within and around us. Those magical vibrations actually speak to us in unexpected ways, only if we bother to stop and listen.

I had anyways satisfactorily performed my 'first-day' pooja. On 'second-day', while I was casually scrolling through some old and random snaps in my facebook profile, I came across a pic that was captured during a family trip to Guwahati, where we visited the most ancient and famous 'Kamakhya Devi' temple, which is one of the most prominent of 51 shakti-pithas and here the deity is worshipped for her 'menstruation' . Yes, you read it right. 'Kamakhya Mata' is celebrated as the 'bleeding goddess'.

A single pic once again ignited the thoughts of tug of war between practices and blind beliefs that exists in our society. But owing and considering the sensitivity of such issues and the emotions attached to it, most people (including women themselves) prefer either avoiding or excusing themselves from such discussions and situations.

While the debate of 'to be or not to be' was still brewing in my mind, all I needed was just a push in the direction that I must proceed towards. Just when I was deep drowned in my own thoughts, my 3 years old daughter, who was invited for 'Kanya-pooja' in the neighbourhood, returned home and directly barged into my lap.

She has a habit of kissing me right on my nose and that's what she did that day as well. Supposedly, that's when the 'kumkum' or 'tikka' from her forehead eventually imprinted a part of it on my forehead as well and later, when I happened to catch a glance of myself in the mirror, I was astonished to find a clear 'red' tikka on my forehead. May be, that was an indication, an agreement to my belief that a natural bodily activity should not and can never stop from connecting oneself to that divine force that drives the entire universe. May be, it was a subtle hint.

However, I still consoled myself that in order to pray to our supreme, one need not necessarily bow or appear at a designated place or in front of something in particular. Prayers that are sent from a clean heart and with honestly good intentions anyways make their way to the almighty.

On the third day, while I was engrossed in cleaning a chest of drawers, right beneath the entrance arc in my apartment, I clearly remember of no physical movement of any object (neither there was any forceful wind movement, nor my daughter was in the vicinity to throw or push anything). Infact, I was sitting still occupied in my work. Yet, out of nowhere, the box containing vermillion (kumkum) that was properly placed on a glass shelf above, somehow flipped allowing the entire contents of the box getting emptied in my hair, smeared on my forehead and all over my clothes. In a span of a moment, it appeared like I had just returned playing 'Sindoor khela'. Honestly confessing, I did get scare for a moment. When Vikrant came running hurriedly, only to find what had just happened, he instantly spoke, "Red is all over you, above and 'inside'." Whatever his intention of saying was, it did strike me hard.

As I immediately proceeded to take a shower and washed my hair for the needful cleaning, all the vermillion that flowed down my body from top to toe, to me it appeared like I have been showered 'Kumkum archana'. Inspite of all my efforts, my hair and face shone red for next two days.

There certainly must be some reason that 'red' is the colour for everything pious, lovely and lively. Red is the colour of blood, the sun, fire, sindoor and 'Maa Durga'.

This incident turned out to be the final stroke and the next day, I did a wholesome pooja all contented from my heart, soul and spirit. I understand, may be, it was the deity's way to remind me that one should stand for and practice what they really believe in. The idea of celebrating 'Durga pooja' in my opinion, is actually the idea of celebrating womanhood, the spirit of feminism (even if it exists in a biologically different gender) and menstruation is just a bodily activity that adds to the definition of being a 'woman'.

After performing pooja, when I extended a token on haldi-kumkum and prasad to my domestic help, she immediately withdrawn herself saying - "Didi, don't come near me, I am menstruating".

I just reciprocated with a big smile and not only applied her vermillion and gave prasad but also made her sit and offered some rice, coconut and some fruits in her lap (a form of worshiping the deity). The happiness and glow on her face knew no bounds.

This was my serendipity that led to a new awakening and enlightenment in myself and my own existence.

Note: The above post is discreetly based on my encounters and experiences and does not at all intend at hurting anyone's religious beliefs and sentiments. 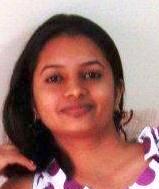